Jacolby Satterwhite Harmonizes (with the) Material 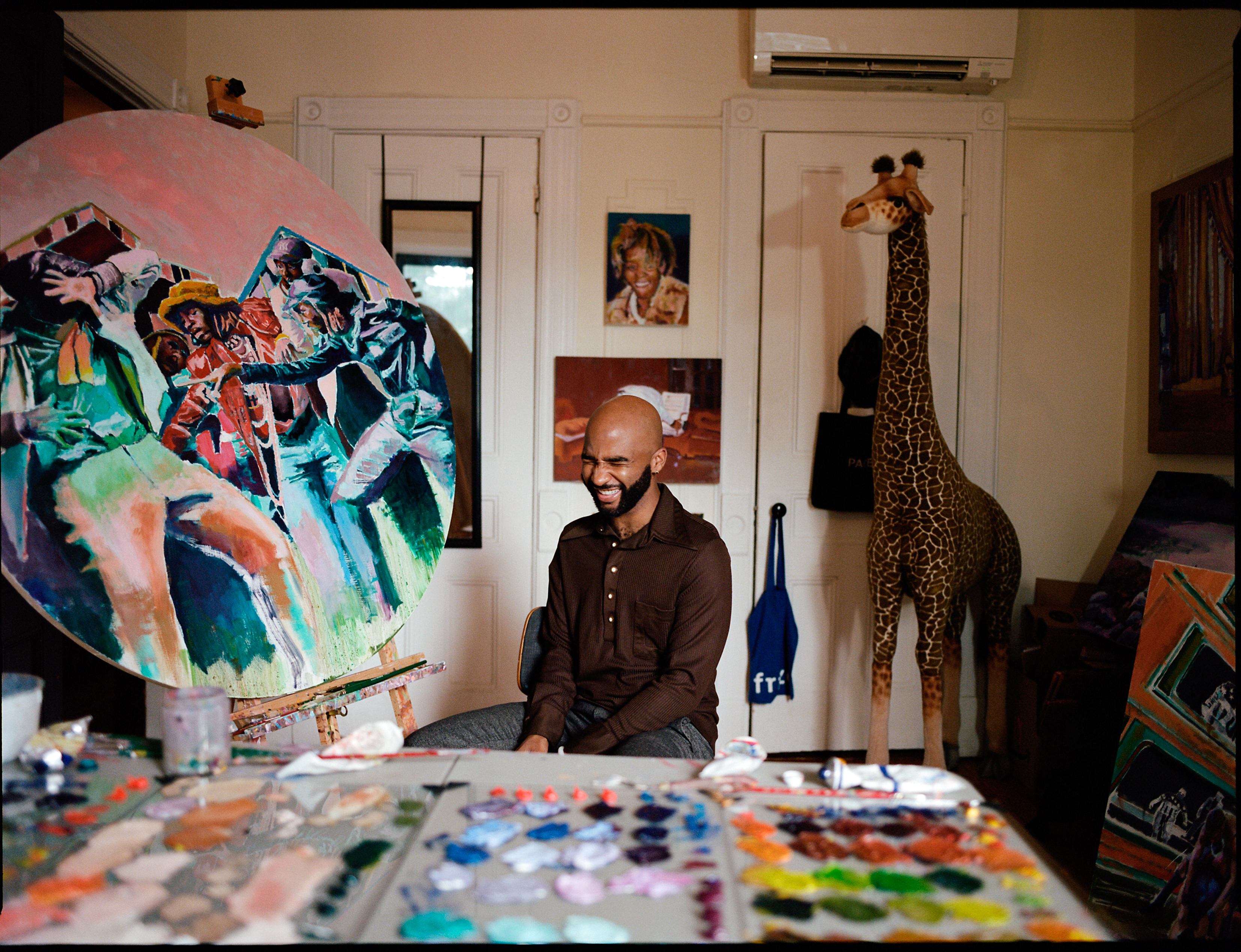 When one is immersed in Jacolby Satterwhite’s films and installations, a dissolution occurs. The experience stretches one’s memory and prompts a longing for spaces we've been, want to revisit, and want to reimagine. World building here is shaped by a rhizomatic approach to modernism that is Black and queer. Jacolby’s multimedia projects map us to an Afrofuturist cosmos capable of liberatory intervention where the racial and gendered boundaries of a consumerist-driven society dissipate. He creates anachronistic episodes within his digital landscapes that disturb temporal linearity, yet foreground an aliveness where past and future are subject to de- and re-composition. We see figures and symbols autonomous in flight and tangled infinitely within cyclical passageways, encompassed by deep echoes of an electronic soundtrack that beats toward a proposed utopia. In works like Shrines (2020) and Birds of Paradise (2017–19), Jacolby’s 3D animations yield spatial distortions that suspend boundaries of movement. All elements within them—architecture, schematic drawings, poems, bodies—are liberated from gravity. What feels more full than floating?

Joining generations of peers in the Artist-in-Residence program at The Studio Museum in Harlem unifies the loop of history he has been a part of within this institution and shared community. His arrival permeates the fluctuating meanings of a remote residency. Jacolby’s hyperactive, alluring universe(s) now extend into his Brooklyn home studio, unraveling and remaking themselves within him and his three-story work/living space. His experimentation, boundless as ever, takes shape at present in the form of public art projects and large-scale commissions.

The conclusion of Birds in Paradise, his feature-length animation series, inspired a major gesture: his return to painting. Jacolby’s origins are as a painter. Looking and listening intently, you can tell. Within his oeuvre of performance and video, his digital textures have remained painterly—a coding, sampling, and choreographed composition rooted in Fluxus, Dada, and Surrealism. Jacolby now directs our focus to evolving imagery through his hand on the canvas. In our conversation below, it’s clear his capacious thought process gives as much as it receives.

This interview took place in March 2021.

Let’s talk about your film Shrines, the final chapter of your Birds in Paradise series. Your fourteen-track LP, Love Will Find a Way Home, provides the sonic backdrop for the series.

Shrines is the encore of the entire Birds in Paradise series, and, sonically, a remixed version of the whole album. If the credits ran over, Shrines would come on after. This was the fastest I’ve ever finished a film. I was in a state—fresh from making my last exhibition at Mitchell-Innes & Nash and I had a lot of stress and energy. I made Shrines organically and feel like it’s one of my strongest works. All the things I learned from making the previous works culminated into a much more shorthand expression. It was a psychic conceptual execution.

For the Cleveland Triennial for Contemporary Art, you’re working on a collective inquiry and public sculpture called Dawn (2021), which will also develop into a multilayered exploratory Fluxus game and installation. It begins in a physical exhibition of objects, and will expand digitally into interactive locations across physical sites. How do the commissions and public art projects you’re taking on fit into your practice?

I’m continuing the system and rhythm I’ve been developing for over a decade: using collectivity to help formulate world-building strategies. For the Cleveland Triennial, with the Cleveland Clinic, I’m soliciting the general public, doctors, essential workers, nurses, in Ohio, as part of a constellation of these archetypes of this new pandemic. I have an assistant researcher who’s going to people’s homes and soliciting these quick, Basquiat-like drawings of what a “better” Fairfax, Ohio, might look like. I asked these people to make a schematic diagram that describes their definition of “utopia,” a potential better future. I wanted to bring together communities of Fairfax and bridge together people who probably had contention before.

I'm collecting more than five hundred assets and will trace and sculpt all their drawings in 3D animation. I asked them to create the composition through animation the same way my mother's drawings did. I want provisional doodles that involve text and objects to propose a space they consider utopic so I’m able to see commonalities between people, and storyboard in a spontaneous, surrealist way as I make a film about constructing this new safe space and collective site.

It feels like you’re engaging utopia in a convening way, one that isn’t oppositional. It extends the boundaries of your archive into a call-and-response that acknowledges sites of comfort and familiarity, but also the hopefulness that can come from destabilizing static definitions of a domestic realm. How are you continuing to interrogate notions of home?

You know, utopias are where homes live. I’m asking people to create contour drawings of objects as surrogates of what exists within their homes, which would be included in this space defined as utopia. I know it sounds heady, but the incongruent nature of this project allows me to find my subconscious concepts through the act of working through it.

Your intensive practice is attuned to that “working” as a double or triple entendre, embodied by inventive repetition. You construct CGI architectural spaces to re-perform and repurpose objects and memories using your present body, mapping movements within a green screen, coding in C#, and rendering with animation software such as Maya 3D and Unity. To me, your sound design also points toward the origins of the techno industry as an apparatus that interrogates the relationship between touch, the machine, and labor from a durational healing perspective. How do you feel like repetition integrates your subjectivities?

Whenever you say something aloud over and over, or repeat an action over and over, the meaning begins to erase and transform into an opaque, flat form that allows you to realize the overarching meta-narratives of this repetition. I’m trying to solve a problem every time, and I don’t necessarily get to the solution, but repeating that throughout a lifetime reveals variations that are more poetic and poignant than didactic.

It leads me to some of the stronger potentialities in abstraction. By design, repetition is organization. I work in a chaotic medium with many systems, like electronic music, dance, text and poetry and drawing and 3D animation and virtual reality. It’s a chaotic array of ideas trying to form one nucleus, and the only way to sustain and build something substantial with that is through the mode of repetition. I have my signature psychological tactical mode that translates no matter what the medium is, so you see my consistencies within the composition.

Speaking to that translation, you’re turning (back) toward the canvas. The possibilities for dialogue between your mediums are significant. You’re making a series of twelve paintings, yet to be seen, some of which conceptually incorporate The Matriarch’s Rhapsody (2013)—your one work in the Studio Museum’s collection—and others your film Shrines. How is the process of painting speaking to you?

My process now is allowing my digital compositions to influence the paintings. I compose in Maya to create a formally resolved composition that could translate into painting or uses the principles of figurative abstraction, geometric abstraction, or the figurative painting and landscape.

Before, I would use the things I'd learned from my painting discipline and make digital C-prints. Now that I've put all my energy into learning this digital language over the last ten years, I feel like I have room to make paintings. I’m using The Matriarch’s Rhapsody as a framework for curating the images. All the paintings reference the conceptual strains of Shrines, and two directly reference the digital space from that video. I also think about Thelma Golden’s exhibition The Black Romantic (2002). In similar ways, The Matriarch’s Rhapsody holds a Black romantic timescape in my life, and it's documented by my mother’s schematic diagrams.

I spent ten years working with the “matriarch” innovation, and now the first real painting I’ve made is of my father. He’s drunk and looking really cool, Ray-Bans on, tie loose. He’s in a transgressive space, inebriated, but with a smile. It’s direct and not surreal. I spent my last two series interrogating and responding to the female energy that raised me. It’s interesting I’m using oil painting to interrogate the male energy.

I’m trying to translate my fantastical, mythic spaces onto a canvas. Making the paintings has made me look at everybody else's work with more empathy and detail. I feel like I can see again because I'm working with my body and hands.

Have you been able to confront or resolve certain tensions and layers that directed you to pivot out of painting?

I’m beginning to understand the witchcraft of painting. It’s like a binary between two studios: I have a painting studio downstairs and a digital studio upstairs.

When you create a binary, you create black and white. You understand the other space—what that space is and what it isn't. Sitting in front of the screen for so long, I lost all of my sense of physicality, tactility, and touch. I started to only understand space through the monitor. That's where ninety-eight percent of my life was.

I’m moving my body around an object and making marks from a pigment to investigate images. I meditate through my digital animated virtuality process. There's something about the opposition of both worlds I think is going to create an interesting middle ground in my practice.

I’ve always wanted to work this way. If these projects come out great, I’ll romanticize this period. It’s my first time having a home studio in this way. I’ve only been here for a few months so I’m still figuring out how this process will shape me.

Your animations extend beyond the screen to sculpture, objects, and multisensorial installations that incorporate VR and, to me, riff on scale. How do you anticipate your decisions to grow more or less experimental as they coincide with the residency?

I’m trying to scale down and focus. I’m adding to it, upgrading it, and making it more intimate. This quarantine and lockdown era has made me more of an introvert. I’ve always been that way in the studio, but I had a nightlife, city life, and was a migrant in the world. The past year made me psychologically do a one-eighty, so I can anticipate thinking that way about exhibitions in the future.

It was a great opportunity to challenge what a remote residency means within the legacy of the Studio Museum. Because my practice can intervene within any kind of space, I thought I was going to use the internet as a studio space for people to experience my work within the residency; because of what the pandemic has done to me psychologically, being domestic and over-bombarded with the screen, it caused the pendulum to swing the other way.

Slowing down has driven my work and storytelling process to become more delicate and conscious of concrete realities and politics. Before, I was thriving on New York City’s rebelliousness and radicality and its refusalist approaches to production. I was much more into illegibility and abstractness. Now, I’m looking directly at things.