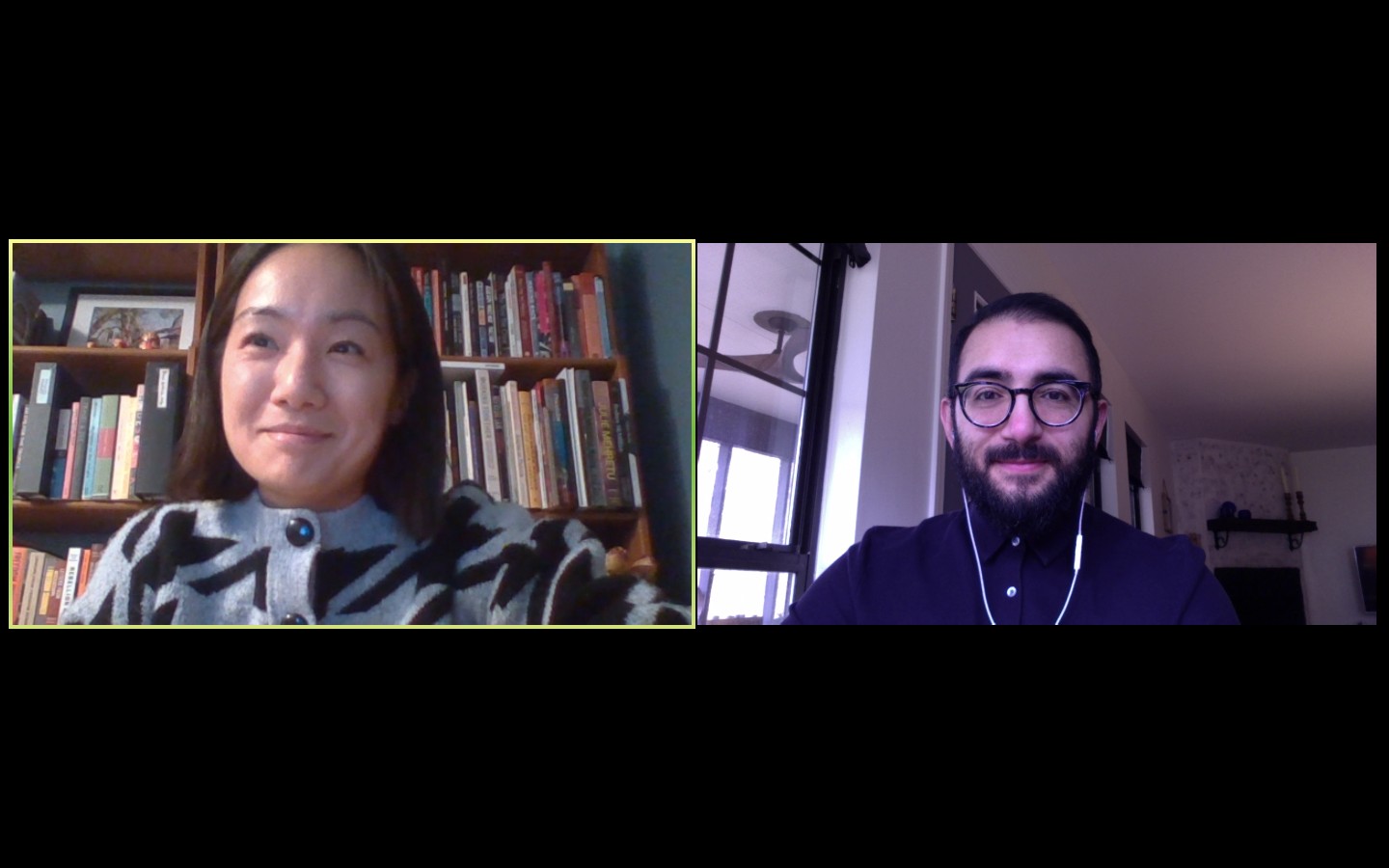 Connie (left) and Ilk (right) check in via Zoom.

Connie, thank you for taking the time to speak with us! Could you please start by telling the readers about your role at the institution?

I am the Associate Curator of the Permanent Collection, which means that I work on all things related to the collections here, including our permanent collection, study collections, and archives.

One of the works in our collection is a two-fold door that contains paintings by Romare Bearden, Ernest Crichlow, and Norman Lewis. These three artists co-founded Cinque Gallery, a gallery in Manhattan that opened in 1969 to exhibit works by Black artists and provide educational programming. I always found it intriguing that these three prominent artists worked together to create an object. If this door was functional, where did it lead? The symbolism of the door itself is something that I love to think about, given how Cinque Gallery opened doors for artists of African descent for over thirty years.

Your role is deeply invested in history—not only analyzing it but in writing it, too. What period of the Studio Museum’s history is most exciting to you?

I am a student and a scholar of the mid-twentieth century. I’m drawn to that period partly because so many people around the country banded together to think through what civil rights was for all. If we look at it from an international scope, so many countries, across Africa and the Caribbean in particular, declared independence from their colonial oppressors. I am particularly interested in that moment in the United States, thinking about how artists really considered and actioned what it meant to be advocates for social justice for themselves, for artists in general, but also for people of African descent around the country. There are a number of artistic movements, artist collectives, groups, and community organizations that were founded to help promote the work of artists of African descent, which is truly inspiring, particularly given the moment we’re in. The Studio Museum was born from that commitment to equity in the arts. The mid-twentieth century has a lot of resonance, and continued resonance, in the work that the Studio Museum does.

We recently launched our online archive, which allows people to see some of the historical materials related to the Museum.  What is a Studio Museum exhibition that you wish you could have experienced in-person, and why?

Oh my god, there are so many—I get just one? The first one obviously, because it was the inaugural exhibition. It was the founding of the Studio Museum and really set the institution's mission. A solo exhibition of work by Tom Lloyd called Electronic Refractions II, it featured electronically-programmed light sculptures that Lloyd created as the inaugural artist in the Museum’s Studio program. The Studio Museum was founded with three major initiatives: our famed Artist-in-Residence program, the Studio program, and the Film Unit. The Studio program was an opportunity for an artist to create new work, particularly work that used interesting or non-traditional materials, and also had an educational component to it. From the beginning, the Museum's mission was very much centered on artists, but also community and education. The Studio program provided the chance for youth in New York City to work directly with an artist, bringing together a lot of the institution's mission. The final component of the program was an exhibition to showcase that new work, which for Lloyd, was Electronic Refractions II.

The Studio Museum opened in September 1968 with that exhibition, and we are lucky to have one of those works currently touring with our collection exhibition Black Refractions: Highlights From the Studio Museum in Harlem, which will be on view at the Utah Museum of Fine Arts starting January 23.

It was obviously an exciting moment—the founding of the institution, the opening. There was a lot of enthusiasm in the air, but it was also a politically tense moment. It was 1968, an incredibly fraught year. There were the assassinations of Martin Luther King Jr.and Robert F. Kennedy earlier that year, protests against the Vietnam War. Within Harlem, the night of the opening, there was a meeting about the potential closure of the Schomburg Center for Research in Black Culture. Artists had attended that meeting and later on went to the Studio Museum. In addition to that, there was a protest at the opening. Someone was apparently upset that it was an exhibition of abstract, non-figurative work. The tumult of the period and the excitement of the opening—I think it would have been interesting to have been a fly on the wall in that moment.

You worked as an educator when you first started working in museums. What skills did education teach you that you still use today?

So many things. I think of curatorial work as being about education, and I say that in all honesty and sincerity. The work that I do, especially around the collection, is about education in so many ways: conducting research on the collection and sharing that research internally and externally with visitors, scholars, and audiences of all ages; thinking through the legacies of artists within our collection and our exhibition program, and strategizing how we can continue to further the institution's mission—that is all education. Conservation and ensuring the proper stewardship of these objects into the future is about education because we’re working with conservators,  thinking about what it means to care for work, and sharing that knowledge out.

I feel like my entire practice has been about education, but I guess one skill it has taught me is public speaking in an interesting way. I am sure you find this too, Ilk, that education is about communication—it's about being able to elucidate and think through ideas with a variety of people coming from all sorts of backgrounds and interests. To be able to communicate effectively with a variety of audiences is not something I ever thought about until I had to lead tours in galleries and suddenly speak about art to five-year-olds and also eighty-five-year-olds. So how do you bridge that age divide but also that knowledge divide? Quite frankly, public speaking is not easy for me. Having that practice was really informative and taught me a lot about how to speak my ideas and think through ideas.

Is there an educator, mentor, or idea that has guided and inspired your career trajectory?

My dissertation was about education in the mid-twentieth century and the photography that came out of it, thinking about the ways in which Black communities were changing their educational structures and were advocating for themselves because of the lack of opportunities in the systems that existed for them. One chapter considered photographs that documented the Black Panther Party, which started its own school in Oakland in the 1970s as a way to educate the youth not only in the ideologies and tenets of the Black Power movement, but also in math, science, and reading—regular topics that children were not given equal opportunities in due to a lacking education system. That has been influential to me because I come from an immigrant background and my parents and grandparents didn’t have real educational opportunities, given a variety of circumstances, so education has always been an important through-line in terms of my career and research interests. So there isn’t one educator or idea, but I’m inspired by that moment in the mid-twentieth century, and how people sought to change their own opportunities through education. 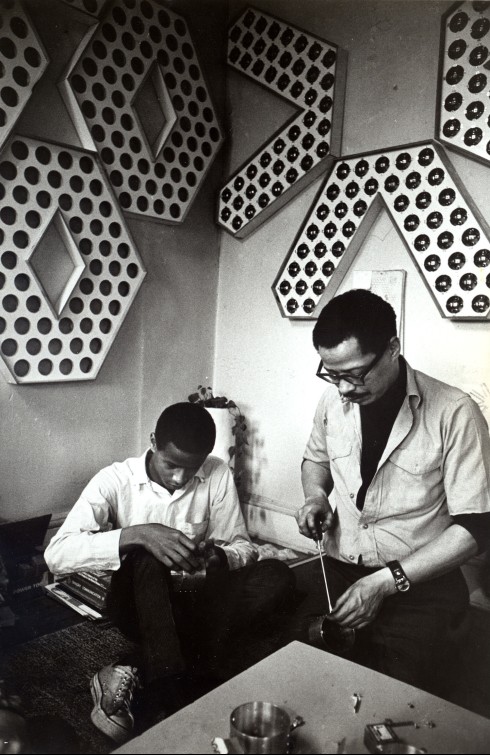 From the beginning, the Museum's mission was very much centered on artists, but also community and education. The Studio program provided the chance for youth in New York City to work directly with an artist.

If you could interview any artist, past or present, who would it be? Why?

The earliest work in our collection is a painting by Joshua Johnson called Portrait of Sarah Maria Coward from circa 1804. Thinking about what it meant to be a Black artist at the end of the eighteenth and early nineteenth century—I can’t even imagine how difficult it must have been to succeed. Johnson is considered to be the first professional African-American artist, someone who actually made a career and living out of painting. It would be amazing to converse with him about what it was like to succeed in a career path that was decidedly closed off for Black people in this country for a very long time, for basically more than a century after when this particular painting was made.

What advice do you give emerging curators who are struggling to find work or make sense of a deeply contracted sector?

I think the field has contracted somewhat due to the pandemic, but it's also opened up other types of opportunities, including work in the digital realm. There is a lot that can be done in terms of thinking through digital exhibitions, scholarship that is circulated more widely through the web. I’m hoping it will continue to have an impact on the future, as we move out of this pandemic moment. Our necessary shift into the digital has allowed for an expanded understanding of art and provided greater access to a wider range of audiences to the arts.

As curators and cultural workers, we have to think through what it means to provide access to the arts in a digital realm, in a way that allows for the work to resonate and for the artist's intention to come through. The possibilities of technology allow for audiences of all types to have either initial, renewed, or extended contact with works. This moment is an opportunity for people to make changes about how we think about accessibility, and how we think about new and expanded understandings of art.

As a curator, you work so intimately with objects. Is there a domestic object that you’ve approached differently because of the pandemic?

My tea kettle! Being home all the time means I’m drinking tea all day. My kettle has had more use in the past ten months than the past ten years that I’ve owned it. I used to drink a lot of green tea, but I’ve become obsessed with this cinnamon black tea, so I sometimes make a giant pot of black tea and add cinnamon sticks and cloves to it.

2020 marks the end of a decade. What are you most proud of accomplishing in this past decade?

I guess the fact that I finally finished my dissertation in 2019, and this was after more than a decade in a graduate program and about thirty years of schooling in general.

Saying good-bye to a terrible year is easy. What is one thing you wish you could keep from 2020? A silver lining perhaps?

Literally nothing. Okay, but honestly, ten months of 2020 were pretty much spent in this apartment so I have everything from 2020 with me right now. I guess my answer is working in my pajamas. Zoom work-life is amazing in that people only see you from the shoulders up. I put on this sweater just for this conversation! 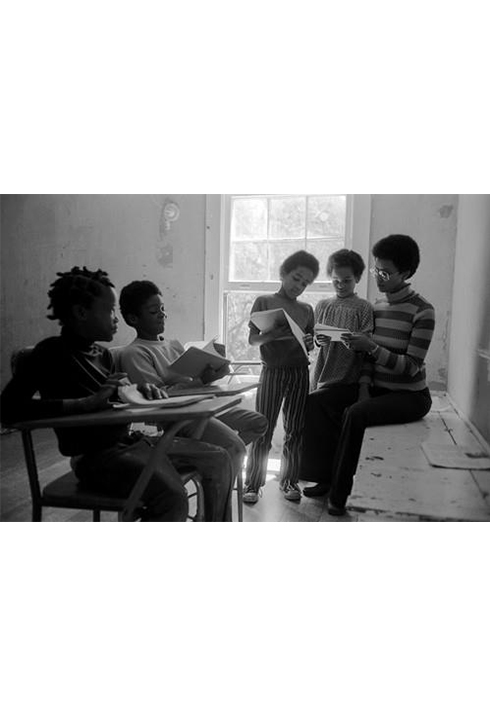