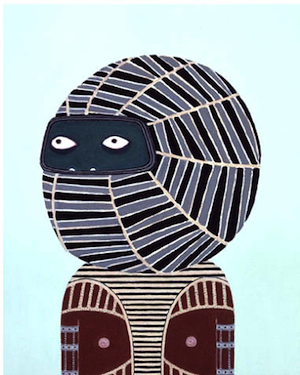 Untitled is a later work in Laylah Ali’s “Greenheads series,” which focuses on androgynous green figures, often depicted in groups in the moments leading up to or immediately following violent interactions. By removing specific signifiers of race, gender, class, and place, the figures become an allegory of social inequity. Ali includes only ambiguous hints about how their larger social order is structured. This work highlights a lone figure (rare in the series), concealed inside a patterned, possibly protective garment that covers all but a small patch of face. As its unblinking, watchful eyes peer out at us, we wonder what in the mysterious figure’s environment has shaped its appearance.