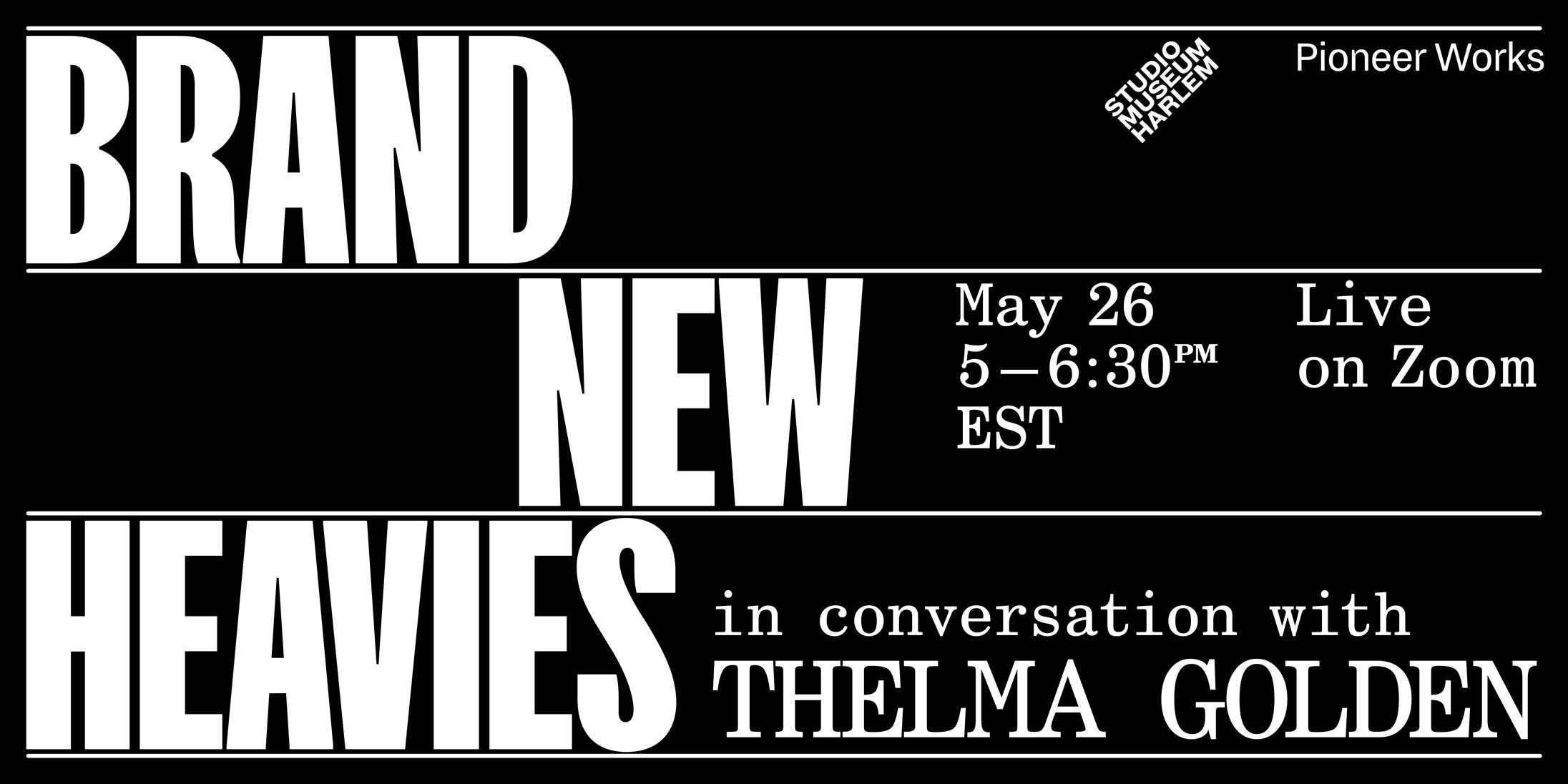 On the occasion of Pioneer Works’ exhibition Brand New Heavies, join Thelma Golden, Director and Chief Curator of The Studio Museum in Harlem, for a conversation with the exhibition’s curators Racquel Chevremont and Mickalene Thomas—collectively known as Deux Femmes Noires—and artists Abigail DeVille, Xaviera Simmons, and Rosa-Johan Uddoh. Together, the group will discuss the themes explored within each of the artists’ newly-commissioned works as well as the historical legacies and contemporary circumstances that inform their wider practices.

Thelma Golden is Director and Chief Curator of The Studio Museum in Harlem, where she began her career in 1987 before joining the Whitney Museum of American Art in 1988. She returned to the Studio Museum in 2000 as Deputy Director for Exhibitions and Programs, and was named Director and Chief Curator in 2005. Golden was appointed to the Committee for the Preservation of the White House by President Obama in 2010, and in 2015 joined the Barack Obama Foundation’s Board of Directors. Golden was the recipient of the 2016 Audrey Irmas Award for Curatorial Excellence. In 2018, Golden was awarded a J. Paul Getty Medal. She has received honorary degrees from Bard College, the City College of New York, Columbia University, and Smith College.

Abigail DeVille is best-known for her large-scale sculptural installations that engage the history of violence against marginalized people and places. For Brand New Heavies, DeVille has created The Observatory, a monumental installation composed of steel trussing, chicken wire, and charred wood that takes aim at Washington, D.C.’s Capitol Building. A scaled-down version of the Capitol dome, The Observatory will house a complex network of miniature video portals that combine still photography, video shorts, home videos, and archival footage of significant historical sites, including the Historic Stagville Plantation in North Carolina, Sullivan Island in South Carolina, and the Combahee River. Above the 20-foot structure, charred liberty poles hang inverted and suspended from the ceiling. This reversal of a common symbol of freedom (dating back to the colonization of the Americas) suggests an alternative history to the one commonly perpetuated, and the videos inside the dome similarly construct a parallel account of those who have been fighting for freedom since the 16th century. DeVille was an artist-in-residence at the Studio Museum from 2013 to 2014.

Xaviera Simmons is known for work that encompasses photography, performance, video, sound, sculpture, and installation. Rooted in experience, memory, abstraction, and history, her practice is fundamentally concerned with the complex relationship between language, landscape, and subjectivity. For Brand New Heavies, Simmons will construct a new, immersive sculptural work, Even in the variations, the division of pleasures help situate us to advocate for, that is grounded in the physical, visceral, and earthly. Comprised of molded, earth-based spheres stacked one atop another in a concentric formation, Simmons’s installation projects physicality and sensual tactility. The towering sculpture contains a video that presents two binaries: that of intimacy and eroticism, and what the artist describes as the more banal “matter of fact” data and statistics found within American political discourse. The environment synthesizes and simultaneously engages the “classical” and the modern, creating a balance between human lust and desire and intellectual information-based research. Simmons was an artist-in-residence at the Studio Museum from 2011 to 2012.

Combining performance, ceramics, video, and sound, Rosa-Johan Uddoh explores the infatuation with places, objects, and celebrities that pervades British popular culture and the resulting/lasting effect it has on self-formation. For Brand New Heavies, Uddoh will present a new multimedia environment that features Black Poirot, a video and sound installation. A play on Agatha Christie’s crime novel Murder on the Orient Express (1934) and its protagonist Hercule Poirot, the 20-minute video is a “recasting” of the novel. The work follows a script narrated by the artist that investigates a forgotten crime aboard the fictional Oriental-Other Express. Uddoh combines archival footage with visually sparse scenes as an anti-colonial gesture that prioritizes the auditory experience over pure visual seduction. Uddoh will also present videos from her three-part Performing Whiteness series, which explores the labor of performance by Black and Brown women.

Racquel Chevremont was born and raised in New York City. In 2013, following a 20 year modeling career, she joined the Acquisitions Committees of The Studio Museum in Harlem and the Solomon R. Guggenheim Museum, while building a contemporary art collection and running the State Street Salon—a platform for artists, curators and collectors designed to help cultivate a new generation of collectors—out of her Brooklyn townhouse. Chevremont currently operates an art consulting business, and is co-founder of Deux Femmes Noires, a platform to bring visibility to artists of color and queer artists.

Mickalene Thomas is a multimedia artist, curator and arts educator, as well as co-founder of Deux Femmes Noires. A longtime resident of New York City, Thomas’s practice draws on art history and popular culture to create a contemporary vision of female sexuality, beauty, and power. Blurring the distinction between object and subject, concrete and abstract, real and imaginary, the artist constructs complex portraits, landscapes, and interiors in order to examine how identity, gender, and sense-of-self are informed by the ways women (and “feminine” spaces) are represented in art and popular culture. Thomas was an artist-in-residence at the Studio Museum from 2002 to 2003.

This program is presented with support from the Ford Foundation and Gucci.